Described as “TV’s most thoughtful existential series”, After Life is nothing short of a sensation. Ricky Gervais’ dark, sad and hilarious dramatic comedy shouldn’t, by rights, be funny. It follows Tony, played by Gervais, a local newspaper reporter who has recently lost his wife to cancer, and who believes he’s gained the superpower of “not caring”. However, as the series progresses, Tony finds meaning through the other relationships in his life.

“Music is like downloaded emotions,” says Gervais. The writer star is talking about the power of nostalgia when using his favourite songs in After Life, for which he had access to his biggest ever music budget.

And if music is downloaded emotions, then Musiio’s tagging AI offers a way to discern and detect those emotions. Our tagging AI recognises 15 moods in music from the audio alone.

So, what can we tell about After Life from AI mood analysis? And how can this help music supervisors and other creators when looking for the perfect mood?

Blueprint of the show

First, let’s look at After Life on a macro level. By examining moods and genres throughout three seasons we can begin to see the overarching emotional arc of the show. 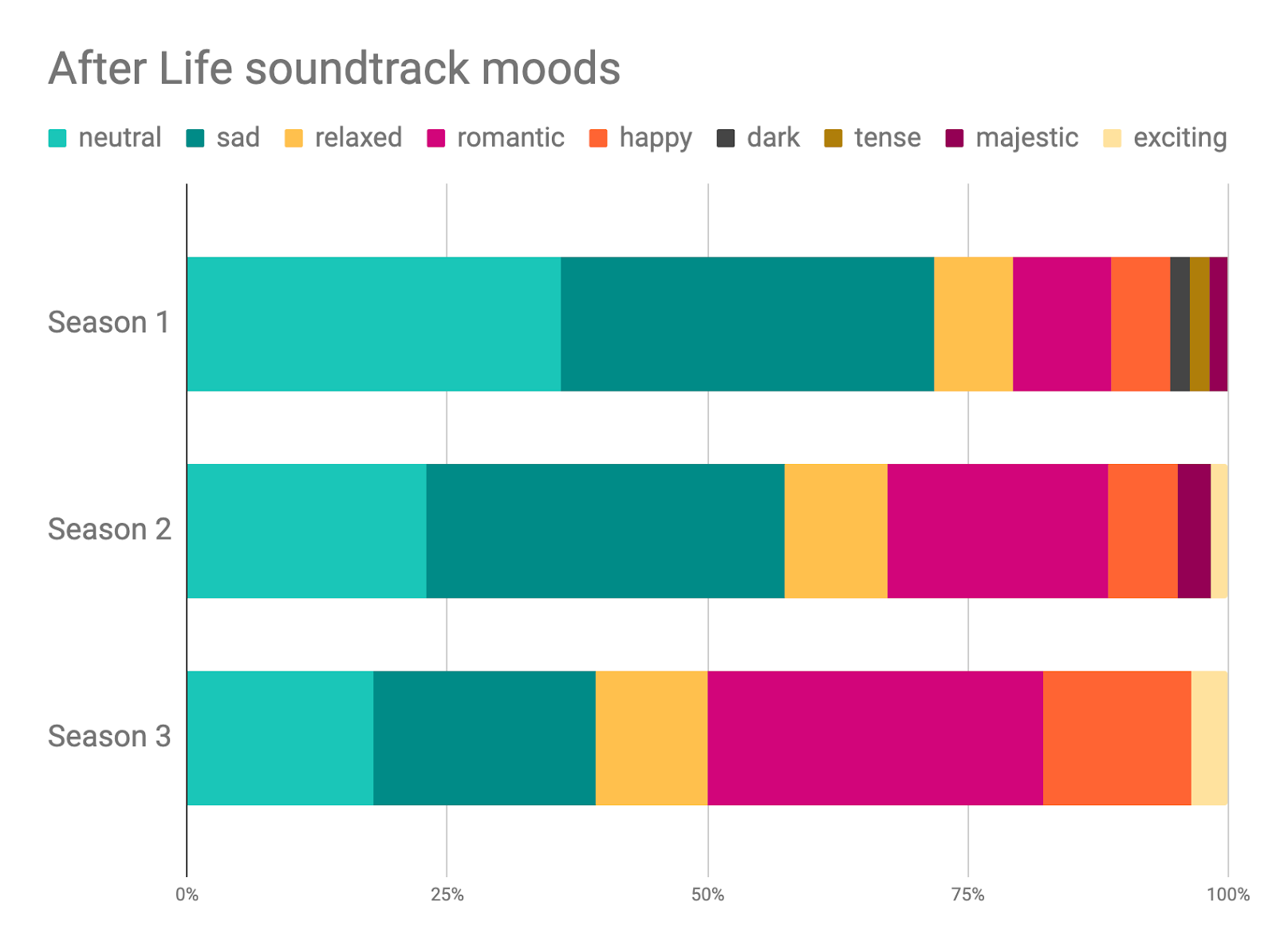 Gervais’ lead character, Tony, begins season one in a deep depression, dealing with the grief of losing his partner. The music follows suit; the music’s mood tags have a high proportion of sad (magenta) and neutral (turquoise) moods. And, notably, there’s a low proportion of romantic (yellow) or happy music (orange).

As the seasons have progressed, we can musically map Tony’s character development. In season two Tony’s relationship with Emma blossoms and it looks like he will be able to move on from his wife, Lisa. Mirroring the on-screen action, the proportion of romantic moods increase, along with a decrease in neutral and sad moods.

By season three, [spoiler alert] even though the burgeoning relationship with Emma doesn’t turn into a partnership, Tony rediscovers his joie de vivre through the supportive community that has formed around him. Again, more happy moods (orange) feature, with further shrinking proportions of sad moods.

We can also see how the genre make-up of the show’s music at a glance. The show begins with a high percentage of ambient, indie and rock music (simplified from our 68 refined genre classifiers). 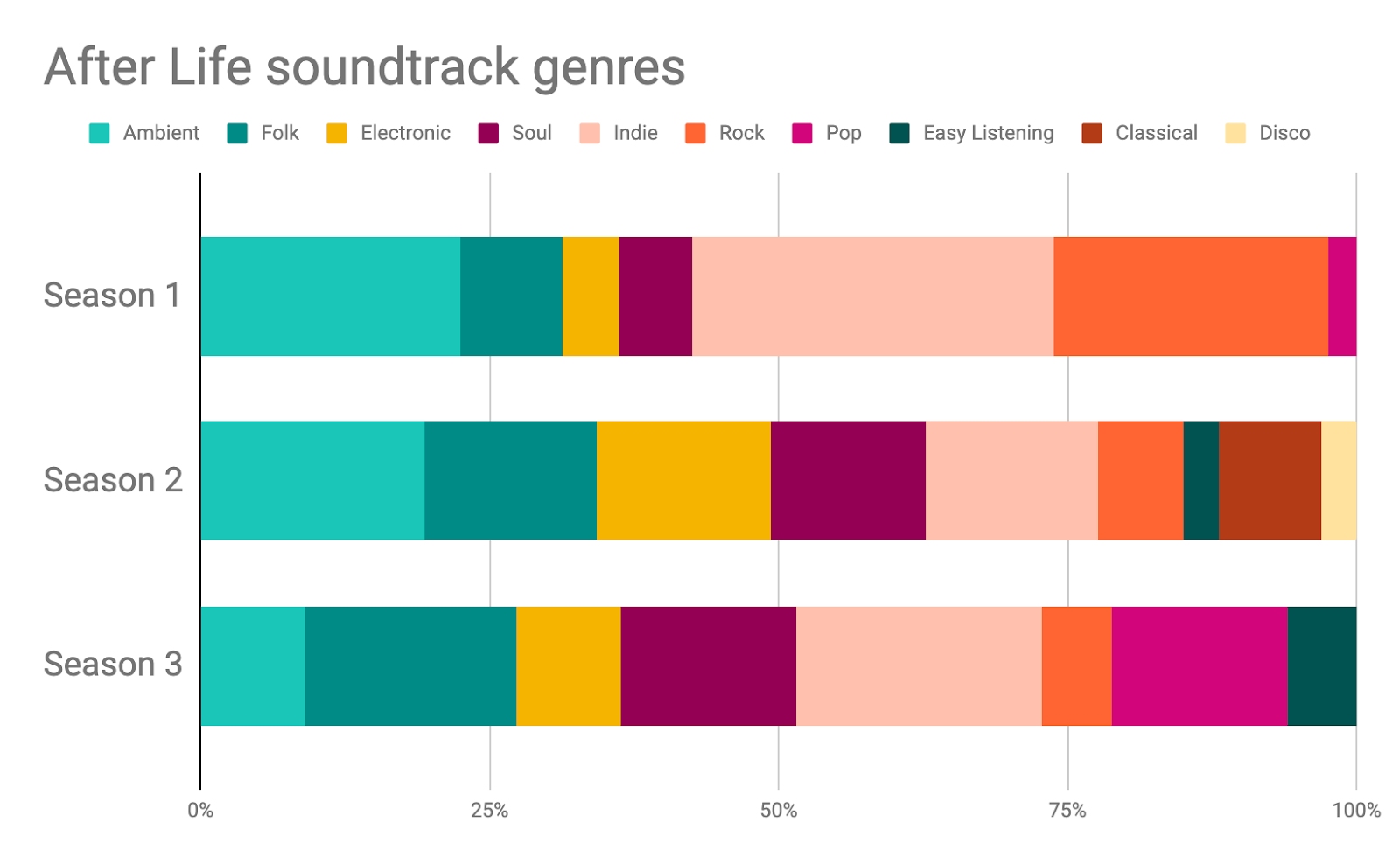 Those ambient genre tags tie in with the character’s depression and ambivalence. Over the course of three seasons, the ambient tags become less common, replaced with more folk, soul and pop tracks, in lockstep with the lead character’s growing positivity.

These mood and genre breakdowns can help us build up a picture of sync trends in television, especially for music supervisors.

In practice, AI-generated tagging gives music supervisors and creators data that can have a meaningful impact on the production and music selection process. While you might want to select pieces of music scene by scene, using data you can get a feel for the overall balance of an episode or season to make sure it accurately reflects what’s happening on screen – and any creative brief.

Gervais has always had a great intuition for music selections, and his selections have been a fantastic fit for After Life. You can see it in the data.

However, having a visual representation of what’s happening in a soundtrack across scenes, episodes and seasons could be a powerful tool when getting a team to agree on syncs.

To find out more about how you can make use of Musiio technology, reach out to us on Twitter, LinkedIn or email on sales@musiio.com.

Tags
sync tagging
Will Betts 24 February 2022
You should also read:

What can we learn from the explosion of ‘Running Up That Hill’?

Do Chords Have Emotions? Our AI Finds Out.

These Viral Songs Are “Bad”. But Are They, Really?

Musiio Playlisting Vs The Top 5 Streaming Services in the World: The Report