2020 was an intense year for the USA. Protests, a hotly contested election, and the Covid-19 pandemic all played a part. According to the CDC, reported symptoms of depression rose by almost 300% between January 2019 and December 2020. 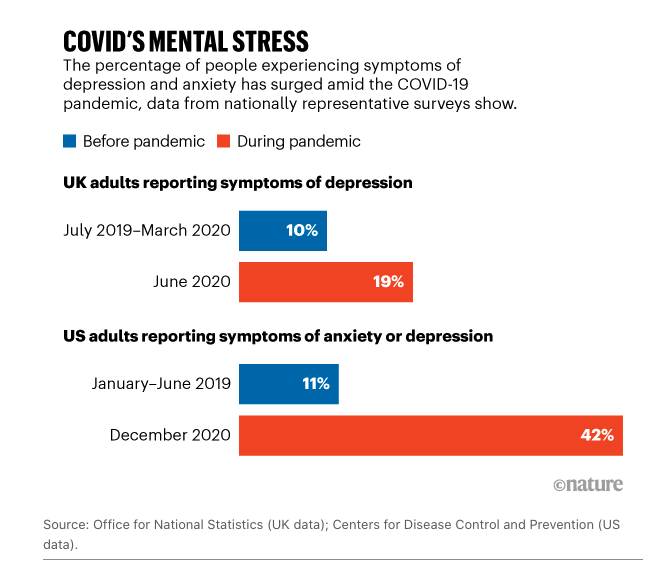 This graph shows Mood Valence preference in 2019 and 2020. February 2020 through March 2020 saw a fairly sustained spike in Positive Mood Valence. The severity of the pandemic as we understood it today, was still not quite yet a reality.

On April 3, the CDC recommended that all American citizens wear masks to slow down community transmissions of Covid-19. Our data suggests that from a music streaming perspective, this was a turning point emotionally.

From April 2020 to the end of the year, Positive Mood Valence would fall from 95.73% to almost half of that (48.54%), tempered only by one outlying post-election spike in late November. In addition, Mood Valence hit <50% scores twice in 2020, something that never happened in 2020.

This steep downward trend seems consistent with the decidedly negative sentiment of news and social media posts in 2020.

In addition to these spikes, 2020 also had weeks that showed the lowest scores over 2 years. 2020, with its higher peaks and lower valleys, was a more volatile year than 2019.

Preference for Very High Tempo (that is, tempos 160 BPM and above) increased more than fourfold over 2 years to a high of 11.10% (compared to a 2-year average of 2.65%) during the 2020 Presidential election (a relatively sustained peak as can be seen in the graph above.

These trends were also reflected in the preference for Minor Key music that would peak at 88.04% immediately after the 2020 Presidential Elections (12 November 2020). While Minor Key music is not necessarily correlated with “Sadness”, as we showed in a previous experiment, it is possible that it is more likely to correlate with other negative Moods, such as Angry.

The Associated Press found that Donald Trump received only 8% of the Black vote, indicating a lack of popularity among that particular demographic. We observed that the Viral charts during the election showed a significant peak of all Hip Hop genres, at 51.52%.

Hip Hop has historically been a genre favored by disenfranchised groups to make their political opinions heard, so it was not surprising that Hip Hop saw a spike in activity during this time.

It is clear from this study that viral music can tell us a lot about what the people of a country are experiencing and trying to express. In this case, it helped us to corroborate findings in general that the USA experienced an unusually high level of mental stress in 2020, and more specifically, that certain events were more triggering than others.

What might viral music from your country tell you?

I am a composer and run a small distributed music, voice, and audio production team comprised of experts in 3 countries. I have a deep interest in startups, business, venture capital, networking, and learning about new ideas. I love meeting founders, angels, and people in VC and private equity to talk shop and connect people that need each other. I've Served clients and brands including Ubisoft, Garena (SEA), IGG Games, Hogarth Worldwide, We Are Social, Moving Bits, Playstudios, Ferrero, Samsung, GSK, Pernod Ricard, Pan Pacific Hotels etc. I’ve also worked with Wang Leehom, Joanna Dong, Derrick Hoh, Luke Slott, and a number of other artists. Founded and ran a professional orchestra in Boston for 5 years.

Taylor Swift’s Midnights has broken so many records – What does she know we don’t?

How Do We Tag 5 Million Tracks A Day?

You can now embed Musiio’s Search technology into your site

Bohemian Rhapsody: Greatest Song of All Time… But Is It Good Quality?

Vintage value: What can we learn from TikTok’s top throwback tracks of 2021?

Don’t Look Up: How do you soundtrack the apocalypse?

Which 2021 Christmas single has the most staying power? And why isn’t it Ed Sheeran’s?