There are many tempos for songwriters and producers to choose from. Is there a way to know which ones are most likely to lead to a commercially successful work? We studied a total of ~6000 songs and uncovered some striking tempo choice trends.

Let’s dive straight into the facts.

WHAT WE LOOKED AT

In this study, we analyzed 3 sets of songs and identified their proportional tempo distribution:

HIT POTENTIAL – What Is It? 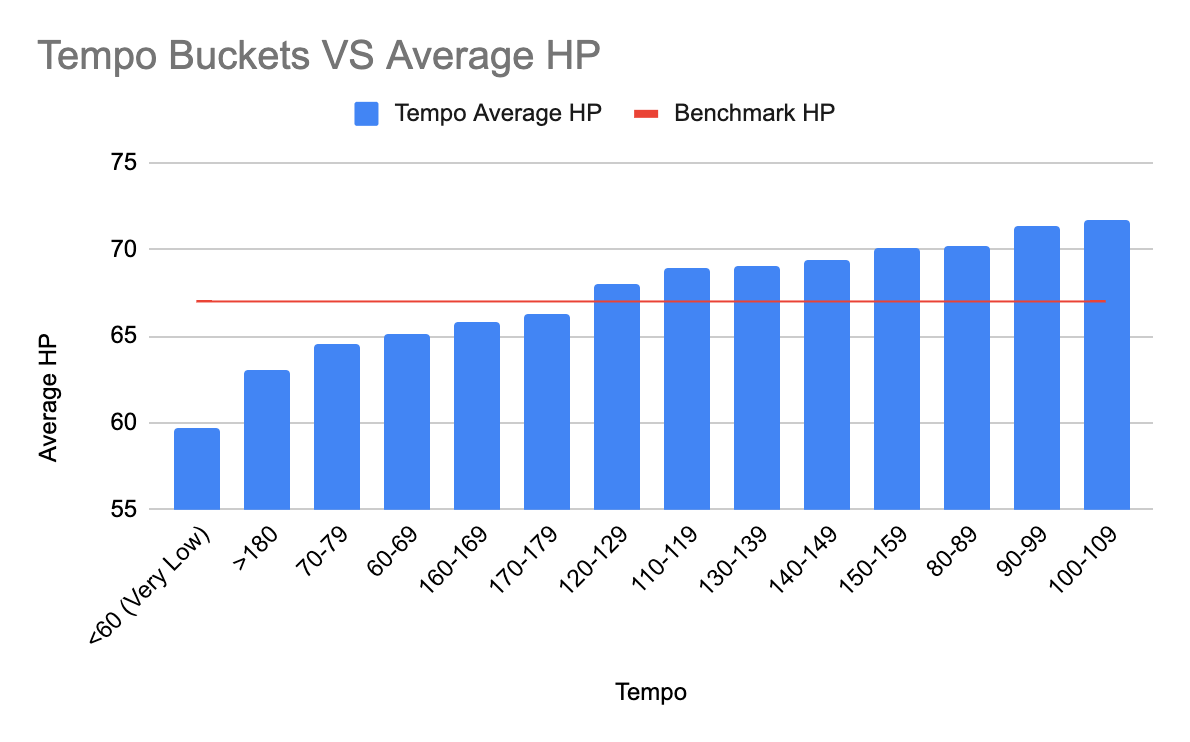 In a previous study, we found that songs with a Hit Potential score of 67 and up were much more likely to be found in commercially successful sets. The red line in the graph allows us to see which tempo ranges had Hit Potential scores that passed this threshold.

Interestingly, there is virtually no difference between the two sets in the 120-129 range, which may be due to a common use of the default tempo of 120 BPM in most DAWs.

The most drastically underrepresented tempo range is 90-99, which differs from the Global set by 6.23 percentage points (34% difference). This particular tempo range also tends to gain the second highest Hit Potential score (71.36) on average.

The tempo range with the highest average Hit Potential score is 100-109 (71.66), which is also underrepresented in the New Releases set by 0.67 percentage points.

The most drastically overrepresented tempo range is 140-149 (by 2.86 percentage points). It is a fairly successful range, representing 9.09% of the Global set, with an average Hit Potential score of 69.44. However, the data suggests that the market may be saturated with songs in this tempo range.

TAKEAWAYS FOR ARTISTS AND LABELS

These results indicate the biggest gap in the market for songs in the 90-99 BPM tempo ranges. Global Top 200 and USA Viral preferences seem to indicate that such songs are likely to be streamed and shared more frequently than songs in other tempos.

This suggests that artists and labels may benefit from writing more songs in these tempo ranges.

I am a composer and run a small distributed music, voice, and audio production team comprised of experts in 3 countries. I have a deep interest in startups, business, venture capital, networking, and learning about new ideas. I love meeting founders, angels, and people in VC and private equity to talk shop and connect people that need each other. I've Served clients and brands including Ubisoft, Garena (SEA), IGG Games, Hogarth Worldwide, We Are Social, Moving Bits, Playstudios, Ferrero, Samsung, GSK, Pernod Ricard, Pan Pacific Hotels etc. I’ve also worked with Wang Leehom, Joanna Dong, Derrick Hoh, Luke Slott, and a number of other artists. Founded and ran a professional orchestra in Boston for 5 years.

How to reset and rebuild your custom taxonomy

Artists and Labels: Are You Choosing The Right Tempos?